When it comes to monitoring how well your campaigns are going, campaigns reports are your key source of information. You will find the detailed reports of your campaigns inside the Campaigns section. In this guide, let's see how you can read the campaign reports and what to do with it.Understanding Campaigns metricsCampaigns can be in the form of SMS or email, and you can view their data about Sent, Opened, Delivered, Clicked, Converted, Revenue, Unsubscribes, and Suppression.Here are the definitions on each metric and how AVADA calculate it:Sent: The number of emails or SMSs that the campaign sent, this is shown in numeric numbers.Opened: This campaign's metric shows how many recipients of the campaign opened your email. In AVADA reports, the opened rate is shown as a percentage, but if you hover your mouse over the percentage rate, you can see the natural number of subscribers who opened your email. Only the first open by a same person will be tracked.Delivered: This metric is specifically for SMS, showing the number of SMSs that arrived to subscribers phone. Since the report for SMS opens will rely on the wireless carrier, we don't include it in the reports.Clicked: The proportion of subscribers who clicked any any link included inside your email or SMS.Converted: This metric indicates the number of subscribers that turned into buyers after receiving the campaign.Revenue: The amount of sales that the campaign made. With eCommerce, this is the main indicator for the success of an email or SMS marketing campaign. We show revenue next to other metrics of the campaign so you can get a full view of the results.Unsubscribes: A bad metric that shows the number of recipients who decided to opt out of your emails. You should aim to have the unsubscribe rate as low as possible. The average unsubscribe rate for eCommerce is around 0.2%. With SMS messages, a high unsubscribe rate is even more harmful. Therefore, you should keep an eye on this metric to adjust the content and offer to bring more value to your subscribers.Suppression: This metric shows the bounce and complain rate of the campaign. The average bounce rate of eCommerce is around 0.3%, while the complain rate depends on your industry. Same as the unsubscribe rate, you should keep this metric as low as possible.Where to read the Campaigns reportsThe General ReportsBack to Dashboard, click on Reports and choose General, you will see an overall reports on all Campaigns when you hit the Campaigns button. 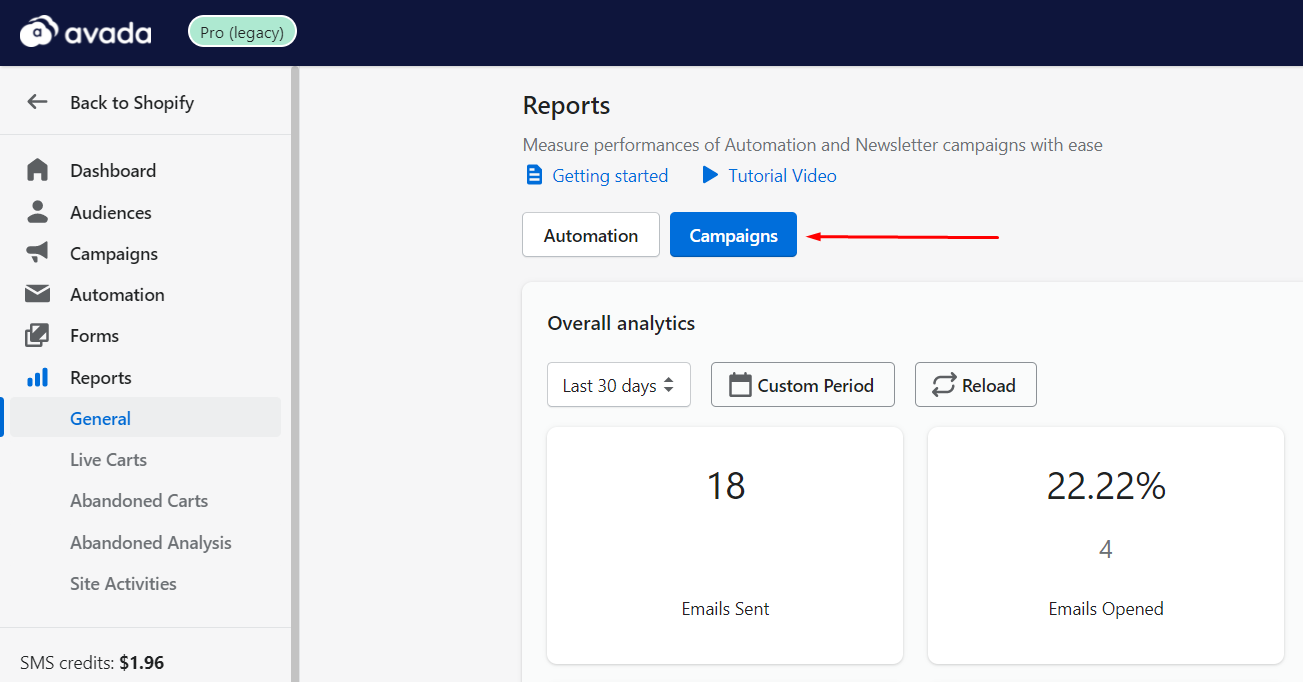 The metrics are still the same with the Overall analytics and Performance. The difference is that these are reports for all of your campaigns. You can adjust the time range to view the campaigns' performance in a specific period. 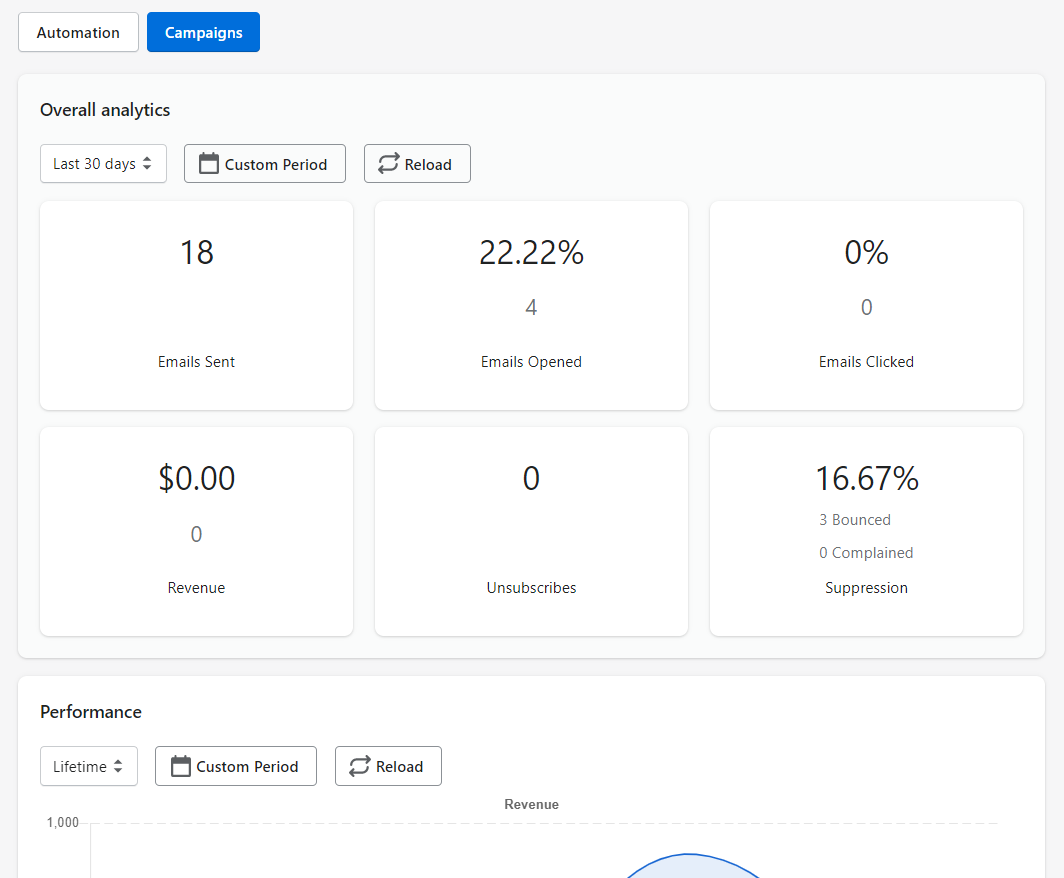 Another difference is the Leaderboards - which shows your top performing campaigns during a specific time range.

The same method is still applied. See the reports to spot which are you can improve. Compare your campaigns performance with your industry and other businesses to know where you are standing.Single Campaign ReportTo read reports on your campaigns, first, you have the quick report at the front of the Campaigns section. As shown in the image below, you can view the summary metrics on Sent, Opened, Clicked, Converted, and Revenue here.

Only the Live, Stopped, and Archived campaigns can have reports. Draft campaigns can't have reports yet since they are not live and sent.As mentioned, the Open rate for an SMS campaign is not shown, but Delivered is shown instead. For the SMS channel, you should rather look at the key metric for performance - Clicked. So always have a clickable link in your SMS campaign to see how much action the campaign can initiate. To view more report metrics and details:Click on any Live, Stopped, and Archived email or SMS campaign, you will be taken to the Reports section. Here, we have two boards for reports.First, you have the Overall analytics board, where you can view all the metrics that we defined in the previous section. With percentage metric, we include a numeric value below show you can know exactly the number. For example, when the open rate is 20%, you can know that there were two emails opened. 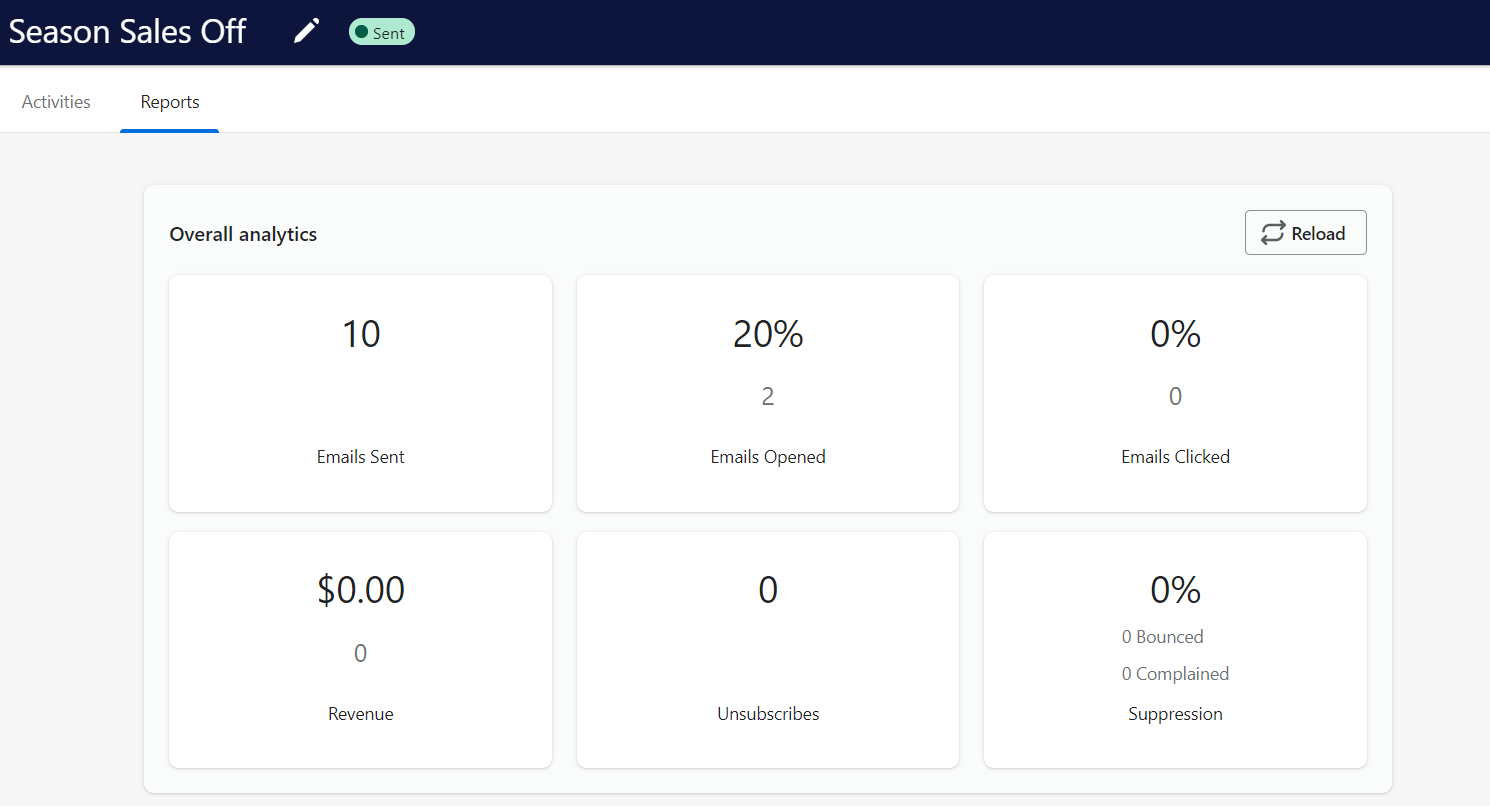 Secondly, you have the First 24h performance board, which shows the metrics in wave form and on an easy-to-view timeline during the first 24h after sending. This is the most important period to decide the campaign's performance, so you should see all the actions from subscribers.during this time. 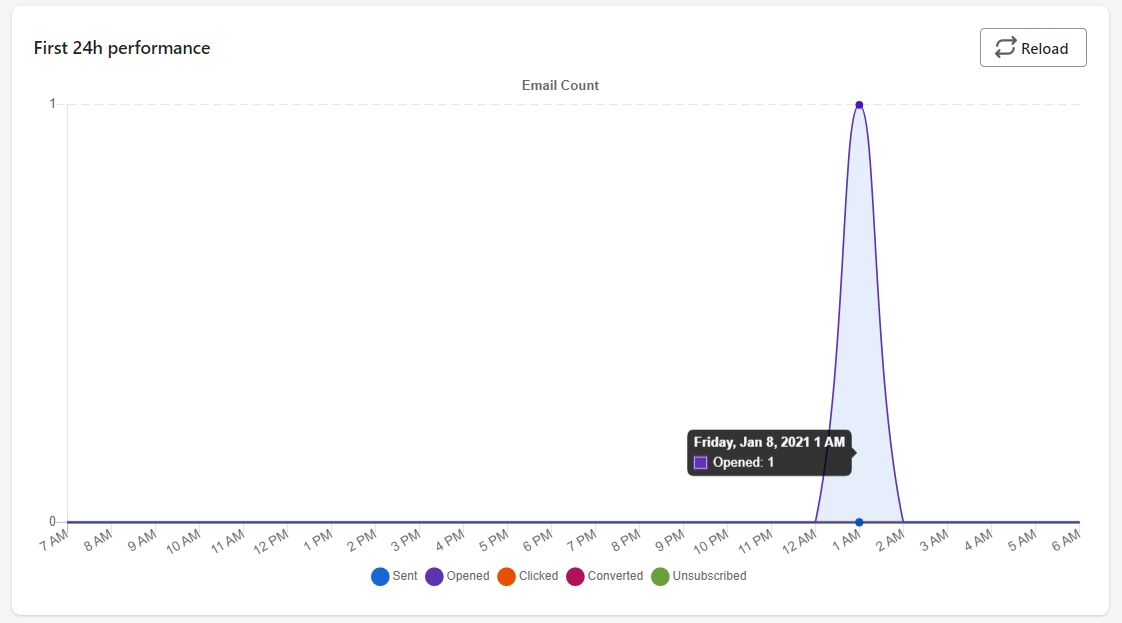 More on the Opened rate:We embed a tracking pixel in an email to determine whether it has been opened. The pixel loads when the subscriber opens the email and sends us a "opens" signal. If the subscriber hasn't turned off the option of loading images, this method of tracking "opens" may be used. If he/she has turned off the option to display images and only receives plain text emails, the HTML version with the tracking pixel loads immediately after he/she clicks on the email's link.Open rates are influenced by a variety of factors, including campaign subject lines and context, sending to a specific audience, and timing. Learn how to use better subject lines to increase open rates and how to launch a successful email campaign that your readers will open!

Was this article helpful?